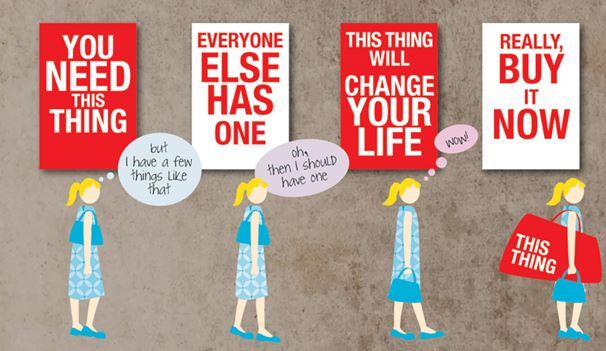 Consumerism, the preoccupation of the society with the acquisition of goods. But what does the consumerism really mean?

Consumerism’s the need that most people have to buy new objects or latest models of something –for example: a mobile phone, although they already have one and is in perfect conditions-. A lot of people buy stuff just to fit in or to belong to a group of friends, or being part of the society.

This “need” is created by the pressure produced by the companies and their audiovisual ads. These companies pay the media to promote their products.  They use a lot of ways to make you want what they sell. They use, for example, weasel word. That is, “this product is going to change your life”. When they do this, they are talking about things that they don’t know, because companies can not know everyone -or that is what we think-. And they do this on the radio, television and billboards. For example, on television, the companies pay TV networks to place 30- to 60- seconds spots during a certain part of the day or during particular programs watched by people in the target audience.

Another example of advertisement is the street’s posters, with colors and big flashy titles that call your attention, those posters are the visual ads that we see the most everywhere.

Probably you have heard about social media -Instagram, Google, Gmail , Facebook. We all know those names. We all have those apps in our phones or computers.  Let’s talk about facebook. It is an app that we all know and most people have a profile there, but we do not know everything about Facebook. Last year facebook collected over nine billion dollars just with the ads.

No one would dispute the fact that we all have seen ads and we all have bought things that we saw on television, but when debating with some partners, we got to the conclusion that we have to start buying things that we like or really want. Not just what we see somewhere in each shopping around the world.

According to the results of a survey in Colegio de la Reconquista, 100% of people has seen an ad somewhere. We also asked where they see ads and 80% of the people answered they saw ads on YouTube and Instagram, 15% on the street and 5% on shops.

We asked them if ads convinced them and 66% said no, while 34% said yes. This tells us that the way companies use to advertise their products may not be that effective. 72% of people said yes when asked if they had seen medical ads, and 28% no, which means that labs also invest on advertisements.

When we asked them if they thought ads lied, 75% said yes and 25% no. This means that people do not always trust publicity. Then we questioned them if ads helped them decide what to buy and 80% said no, while 20% yes.