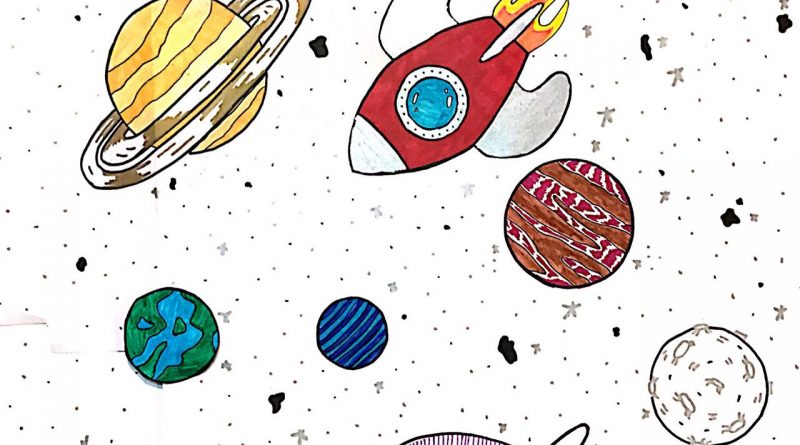 13th may, 2132
Dear diary,
My name is Scarlet, I can’t believe this! I am in the space and we don’t have connection with the earth.

It all started when my mom was at work, she was always there. I was bored, in my hose, so I thought about watching TV. I got a bit scared because the news said something about the ozone layer and radiation. The girl on the screen looked terrified. Her face made me call my mom.

My mother appeared immediately after my call dishevelled. The minute she saw me, she screamed in horror, “SCARLET! Hurry up, we have to go!” I got some clothes, food and my cat – best friend-, Dobby.

Right now, I’m travelling somewhere, by Jeep, with people that I have never met. My mom is sleeping. There is a guy looking at me and he is making me uncomfortable. I need to wake up my mom; I want to know what’s happening. I shake her head and she wakes up quickly.

Where is dad? I ask. She says that he’s at the hospital. He won’t come with us. I want to know where we are going but she starts making faces. My mom explains that the level of radiation is rising. According to her, the earth is going to be inhabitable. Everything on earth is going to die, human beings and animals. I’m shocked. We are escaping without my dad. I’m crying.

23rd may, 2132
Dear diary,
We are in a spacecraft. We just got some radios but normal people, like me, can’t use it. The government took the important people, like doctors, engineers, and scientists to keep them here, safe. My mom is part the of the “Important people” group. She used to work in communications at NASA.

I’m tired. I really miss my Dad. I don’t know if he is still alive. I have to do something. I am looking for information about the radios and the emergency spacecrafts. I’m definitely coming back to earth.

29th may, 2132
Dear diary,
I haven’t written for a couple of days. I haven’t told my mom about this, either. She would never let me to do this. I took the radios, they were in my mom’s office. Wish me luck.

Scarlet really missed her dad. Love was stronger than her fears. She went to the control room inside the spacecraft and left a message to her mom saying that she loved her. The young lady got inside the emergency spacecraft and went back home.

Her spacesuit allowed her to breath for three hours. She had three hours to find him. The trip was really hard, but she was hopeful. Scarlet arrived the earth and turned the radio on. Even though she tried to get some kind of signals, nothing happened. A couple of days before, her mom had told her that her where the hospital was. The woman never imagined her daughter would escape from the spacecraft to go find her dad. Scarlet was five kilometres away from the hospital and she had consumed a lot of minutes of the air in the suit. A noise came from the radio. She heard it.

“Scarlet, where the hell are you? Are you on the earth? It’s very dangerous,” the woman cried.

The conversation ended and the signal disappeared. Scarlet was alone again but her suit had only 30 minutes. Luckily, she was near the hospital.

Without hope, Scarlet went inside the building and ran through the corridors. Suddenly, she saw someone, it was her dad.

“My darling, you are here. How…?” he asked weakly.

“Don’t worry about me. I’m fine. We have to take advantage of this time together.”

“Dad, I’ve put my life in danger for you. Fight for your life, please.”

At that moment, her eyes widened. Scarlet fell to the ground, she was exhausted and the air wasn’t helping her. Her eyes were open but she couldn’t see anything. Her head hurt. She was running out of air. The man took his mascara off and put it on his daughter, but it was too late.